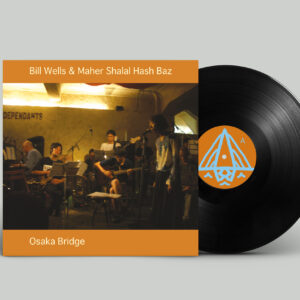 * All Orders Include An Instant Download Of The Album Incl. Two Previously Unreleased Bonus Tracks.

Originally released in May 2006 through the German label Karaoke Kalk, »Osaka Bridge« was an album that captured the joyful amateurism of Tori Kudo’s free-spirited Japanese collective Maher Shalal Hash Baz and Bill Wells’ rich, wistful and easy sense of melody. Approaching brass band and jazz music with a knack for making playing imperfectly feel perfectly right, »Osaka Bridge« became nothing short of groundbreaking when it was released to critical acclaim, becoming an instant classic among musicians and fans alike. Coinciding with the release of the second LP of Wells’ on-going collaboration with Danielle Price on tuba, The Sensory Illusions, Karaoke Kalk makes this highly sought-after record available again on vinyl for the first time in 16 years.

The pairing of the prolific Scottish pianist and composer and the fluctuating collective active since the mid-1980s was an easy, natural one—a union particularly apt and complementary. But this is not to say that the 15 recordings which made up »Osaka Bridge« were in any way seamless. The horns played by these self-taught musicians strain and struggle with Wells’ luscious arrangements; each note is given all the stiff emphasis that you’d expect of a high school brass band at its first rehearsal. Songs fall in and out of rhythm, and a track like »Poxy« misses its intended swing feel by a country mile. Of course, this is all part of the magic. Maher Shalal Hash Baz take Wells’ melodies and strip them back to their emotional core, disallowing all artifice and revealing a stark, serene beauty.

Particularly affecting are »On The Beach Boys Bus«—described by colleague Jens Lekman as the »the most beautiful melody I’ve ever heard«—and »Time Takes Me So Back«, the two tracks sung by Kudo’s wife Reiko. Inspiration for both pieces came to Wells in dreams. The former was sung by a group of tanned Californians on the way to a Beach Boys convention, the latter by his grandmother shortly before she passed away. Reiko’s voice gives each song a haunting fragility that enhances their phantasmagoric character. »Cowtail Calypso«, on the other hand, was born when Wells asked Tori Kudo to sing Roger Miller’s »King Of The Road« over a syncopated, propulsive melody. Kudo’s ambiguous response (»maybe,« which according to Wells usually translated to »forget it«) resulted in a brief, idiosyncratic track that nevertheless exceeded all of Wells’ expectations.

Of the instrumental tracks, »Liquorice Tics« stands out for its rolling rhythms and circular melody, while »Family Sighs« creates a brooding atmosphere which perfectly encapsulates the conflicting feelings many people have for their immediate family. For the most part, the instrumentals are concise—a melody stated once and then dispensed with—but their brevity only heightens the impact. Even (or especially) 16 years later, »Osaka Bridge« continues to be an almost accidentally timeless document that captured fleeting moments and personal revelations at their most spontaneous and unaffected. As someone put it so aptly in a Discogs comment a few years back, »this is the album which is able to make aliens understand what humankind is about.« You better turn up the volume so that everyone can hear it everywhere.