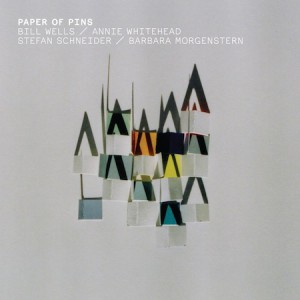 With the release of the album “Paper Of Pins” Karaoke Kalk brings you a truly harmonious collaboration between Bill Wells, Ann Whitehead, Stefan Schneider and Barbara Morgenstern. The Scottish composer and pianist Bill Wells is already known, among other things, for the Kalk release “Osaka Bridge” (2006) together with Maher Shalal Hash Baz. The four artists present on this new record already brought out one album together “Pick Up Sticks”, in 2004. Mr. Wells is responsible for arrangements and samplers, while Barbara Morgenstern experiments on the keyboards, Stefan Schneider controls the synthesizers and bass and Annie Whitehead plays trombone and melodica.

The coming together of this quartet on “Paper Of Pins” has resulted in mature, yet unforced sounding compositions. The touching number “Brown Reduse” wins you over with its catchy piano sounds and subtle trumpet which is rounded off by the electronica. It’s a small orchestral gem in the jazz style which is still edgy despite its perfection. This is highlighted, for example, by the fact that you can hear the brass player drawing breath on some tracks. Certainly, the Scottish composer is no perfectionist. This was already plain to hear on „Osaka Bridge“. Far more important is the melting together of melodies and a certain strangeness in the notes used. Things start to get more abstract in pieces like “Rowing Without Oars”. Its a lively mish-mash of various, sometimes piercing tone variations and swirling keyboard sounds. Occasionally fragile or impressively impulsive. Every now and then the strongly accented horns come into play, and they couldn’t sound more improvised.

All in all „Paper Of Pins“ is a fascinating album with emotional, but also artistically ornate melodies. In this way every track contains its very own unique beauty and fervor.

01. Brown Recluse 02. Rowing Without Oars 03. Tributaries 04. The Hermitage Of Braid 05. Which Brings Us To 06. Produce Of More Than One Country 07. Loitering With Intent 08. The Three Ronnies