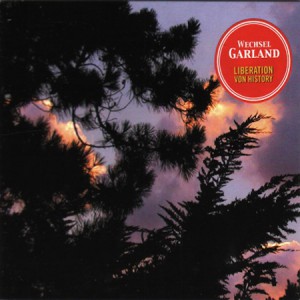 “liberation von history” somehow reminds one of a jumbled up jigsaw puzzle. you are easily tempted into trying to fit together the obvious pieces in your mind according to your customary logic – until those few little pieces turn up that just wouldn’t fit in, and you realise that it isn’t meant to be rearranged at all, that, rather, it’s those stereotypes lodged in your head that are to be tidied away.
on “liberation von history”, wechsel garland is playing a lot with seeming contradictions. the two very different facets of his music whose cohesion is not immediately accessible correspond to the album’s two sides: while side one sounds sad and melancholic, side two appears very at ease and libe- rated from musical conventions.
jörg follert has come a long way since his “wunder” album. with “liberation von history”, he in a way liberates himself from the stereotypes or clichés that had then been attributed to him. you will nonetheless find everything you used to love about his music, everything that fascinated and enticed you, here again – only different, taken much further.
the album features guest performances by jens massel (the person behind the karaoke kalk projects kandis, fumble and senking) at the bass, jacques palminger (member of the hamburg-based band universal gonzales) and final- ly the voice of japanese singer hirono nishiyama.