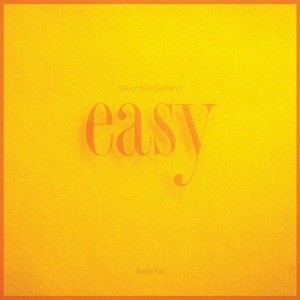 Easy miracles: a fascinatedly lingering glance, a smile on an autumn afternoon, sounds on the way from the city to the shore of a lake or the memory of a lovesong.
After I had it all All I needed was you
Jörg Follert’s singing in a duet together with Yvonne Cornelius aka Niobe and with those two lines he describes the general mood of his new Wechsel Garland product. Those two lines may hint at experiences made in both the working on music or in meetings at different angles of life. Because for both spheres it’s true that desire even in its most tender coloration will always reveal its own drama. Because wishes and desire need a special form of expression. So this was the reason why “Easy” urged Jörg Follert to sing and towards the song.
Sure, there have been elements of both singing and song in his work before but not as distinctly arranged and not as forcefully set in scene. Approaches to more song- oriented tracks have been inherent on the “Wunder” album and Follert has been following his idea to travel in sounds with various sketches that became more and more concrete, culminating in “The Isle”, which was created together with World Standard, and the “17 pictures Album” which unfortunately will only be released in Japan (12. December 2005). Now with “Easy” he is taking two steps at once, not hastedly but just like that. With sprezzatura – almost as if there was nothing to it.
But in fact he’s crossing borders with the first step already, creating an interplay between songs and instrumentals which in turn have taken in their parts from Minimal Music and Cooljazz but let their elements communicate in a non-dogmatic manner. Various guests support the eclectic range of rhythms and sound details. Apart from Niobe Tusia Beridze is singing, too, adding her succintive art of dreamy observations to various tracks on the album. The Argentinan artist Gustavo Cerati is extending the musical parc with his guitar- and basslines and some additional sounds. Whereas the wonderful mouthorgan comes from Follert himself again, yet another previously unexploited talent nonchalantly coming along as a gimmick to Follert’s outing as a pop singer.
Jörg Follert’s second step is to take care that between the multitude of ideas, both songwriting- and sound-wise there still remains some gentle air to breathe. Nothing crushes itself but instead there developes a certain view for the subtleties and fine differences emerging from Bossa Nova, Reggae, early Everything but the Gilr’s Jazz Pop and the dodges of a Caetano Veloso – a multivarious lightweight, so to say. Revealing more and more of its plenty levels with every listening-to it’s remaining there mouth-openly amazed by Wechsel Garland ‘s secret tricks or maybe it’s just debauching in the beauty of itself once more – Easy.