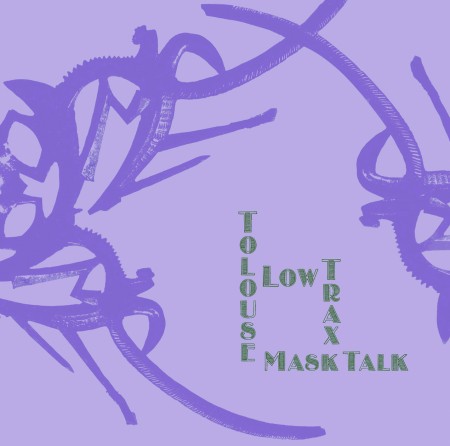 For ages nighttime was said to be the time of ghosts and spirits. Creatures of the night were believed to gain special powers between midnight and dawn. In latin this shrouded in mystery lapse of time was called “intempesta” – time without time. Detlef Weinrich, alias Toulouse Low Trax, too, seems to have lingered in the irrational universe of frozen continuity quite frequently within the last two years. Everyone who drifts to the sound of his first solo album “Mask Talk” will soon sense the musical intensity boding a different dancefloor.

Cool, atmospheric new-wave-sharpness, and a cushioned beat rate between 107 and 116 bpm call out a mechanical functionality that doesn’t bow to any contemporary doctrine. “Mask Talk”: urban music, club album. Big city lights in Africa. Chilly neon-sounds made in Dusseldorf.

As a member of Kreidler, Weinrich just recently participated in the trio’s newly found cosmic vibes, as well as in their album “Mosaik 2014”. Now, with his solo project, he is demonstrating that a MPC and a small synthesizer-ensemble are enough to bring alive futuristic dance music in the here and now.

Bedroom-recorded under tense creative circumstances, the ten tracks invoke, mostly instrumentally, an eerie atmosphere that would fit in perfectly with an early John Carpenter movie. The tracks’ volume sounds as if a whole band had been at work in Weinrichs own four walls. With plenty delay on the bass figures, compact analogue effects, percussive dabs and a rough blend of layers, Weinrich has, without any digital support, created quivering drum machine music, whose dancability he was able to test regularly as a resident DJ and co-owner of the Dusseldof-based club/ bar “Salon Des Amateurs”. His new tracks breathe the hypnotic power of his DJ sets, where he arranges diverse rhythms between krautrock, cosmic, electronic and acid. They also remind of analogue-electronical pioneers such as Cluster or Peter Baumann. Also 1980s avant-gardists Cabaret Voltaire or Zazou Bikaye have left their mark, without Toulouse Low Trax explicitely referring to them.

All tracks are committed to experiment. They leave room for every sound without neglecting rhythmical clarity. A dark, urban solanum, full of reverb, whose melodies are never prankish, but whose minimal nonchalance is sure to help not only the dark creatures through the night. “Form is essence brought to the surface” Victor Hugo wrote 150 years ago. “Mask Talk” is reasserting this theory as a destillate of an operating procedure seeking to subvert ingrained listening habits and to resharpen the contours of the audible. Electronic music beyond any categorisation, whose sounds and rhythmics grow to an emotional atmosphere that far exceeds the immediately hearable.