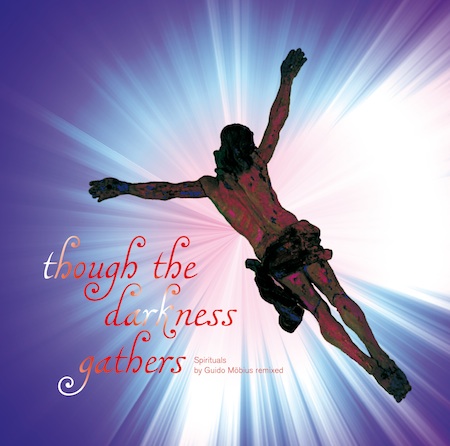 
THOUGH THE DARKNESS GATHERS - Spirituals by Guido Möbius remixed

Guido Möbius’ fourth studio album “Spirituals” appeared in July 2012. „Spirituals“ united subtle humour and dark premonition, transfiguration and kitsch. Six out of the nine pieces on this album use lyrics taken from traditional gospels. Without knowing the originals Möbius set the texts to new tunes and so used them for his own ends. The subject of spirituality is approached from track to track in very differing ways. Whether through hypnotic rhythms, cathartic noise or the reassuring sound of an amateur choir. Thereby the agnostic Möbius is not looking to provoke or at any kind of religious critique. Much more he has accustomed himself to something that is deeply rooted in the collective consciousness. Spirituals and gospels can be powerful and energetic. Guido Möbius has brought this energy into a new context.

This playful style of creative conversion now finds its continuation. Möbius asked eight of his favourite contemporary musicians to make their own versions of his new Spirituals. The results could hardly be more varied or entertaining.

Senking throws the door open with a kind of Doomstep track in his dark and compulsive interpretation of „All Evil Ways“. He is followed by Rotaphon, an alter ego of Boris Hegenbart, here with a weightless version of „Blessed Sleep“. The French duo Gangpol & Mit turn the feverous „Godhead Appears“ into a kind of Voodoo-Jazz piece with a high speed finale in seven four time. With a totally new melody and created solely from samples generated by pitch shifting splinters of the track „Judgment“ Jason Forrest has created a true Armageddon Version of this cheerful music for the end of time. Candie Hank aka Patric Catani emphasises the funk in „The Reign of Sin“ with club friendly Raumpatrouille-Orion-Sounds in his remix of „Reign Of Sweet Sin”. Harmönia label colleague and protagotonist of the Finish Skweee scene Mesak delivered a hypnotic slow motion monster with „Babel In Port To Mesak“. A wonderfully rounded instrumental old school version of “All Around Me” is provided by the hyperactive Sick Girls. And Daniel Padden (Volcano The Bear) sets a magical closing point with „Send The Ark“.

Although or perhaps because the remixes gathered together here are so different „Though The Darkness Gathers“ is an acoustic discovery journey of an album wherein each piece is a fine surprise.