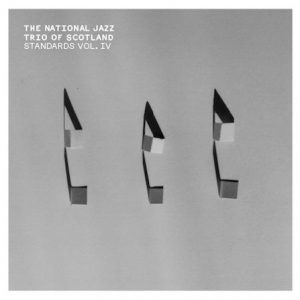 ** All orders include an instant download of the album

“It’s kind of a double bluff calling it the National Jazz Trio Of Scotland,” says Bill Wells of a group that is famously neither a jazz band or a trio. “I was trying to be kind of perverse about it, calling it jazz and then deliberately not having anything that actually related to jazz.” On their latest album, Standards Vol. IV, the National Jazz Trio continue their engagement with classic and outsider pop traditions, subtly building on their characteristic blend of beguiling melodies and spare arrangements. There is even, dare we say it, a hint of jazz. “For this record, I’ve opened it out,” explains Wells. “There are drums on it, which I haven’t really had before, even though they’re sampled drums, and there are bits of improvisation like with the viola on ‘Passing By’ and ‘A Quiet Life’. That’s the first time there’s ever been anything resembling improvisation on a National Jazz Trio album. I wanted something in there that was improvised and quite out there, very out there as it happened.” That latter track also features a sampled irruption of big band jazz, as if Wells is transmitting live from a New Orleans second line, Dictaphone in hand.

These oblique visions of jazz aside, the album’s most striking development is its focus on a single lead vocalist in Kate Sudgen. This is the first in a proposed series of albums to feature one singer from the NJTOS, with Gerard Black and Aby Vulliamy to follow. Wells is full of praise for Sudgen’s beautifully unaffected voice. “It’s just a case of her being a brilliant singer. I feel that she’s underrated. She’s as good as people like Liz Fraser. It’s almost like her voice sounds like it’s double tracked without it being double tracked, like Gerry Rafferty or Robert Wyatt. There’s a graininess to it.”

As Wells notes, Sudgen does not have a conventionally powerful voice, but her understated approach has a real emotional pull. “I suppose I like things to be very plain. I do like people who can hit notes, but I can’t stand most jazz singers because they over-sing. I think sometimes the more emotional you are, the less emotion you convey. With Kate, it’s very deliberate, it’s all very considered, and in a way people like that are the best jazz singers. It might sound quite casual, but there’s a lot of thought behind it.”

This decade has seen a flurry activity from Wells. In 2012, he won the inaugural Scottish Album Of The Year award for Everything’s Getting Older, a collaboration with Arab Strap’s Aidan Moffat. In 2011 he released Lemondale, recorded with Japan-based musicians including Jim O’Rourke and Saya of Tenniscoats. Four years later, he assembled a stellar cast of musicians including Annette Peacock and Yo La Tengo for Nursery Rhymes, an exploration of the darker side of childrens’ songs.

Wells’ penchant for détournement and bittersweet irony crops up throughout Standards Vol. IV. Take “Tinnitus Lullaby”, where Sudgen softly sings of “a never ending ringing” to “save your soul from sleep” over the melancholy twinkling of a music box like synth. The song is accompanied by an animated video from artist and singer-songwriter Marry Waterson, which for Wells recalls the DIY weirdness of 1970s British childrens’ television. “She’s got quite a dark sense of humour,” says Wells. “I actually laughed out loud when I saw it because it so captured the mood. She’s just one of these people who’s so supremely talented.”

‘Anticipated Sentence’ makes a wry reference to the Sinatra standard ‘I’ve Got The World On A String’, a song Wells dislikes intensely. “It’s by Harold Arlen [and Ted Kohler] who is one of the great songwriters, but it’s this relentlessly happy thing and I just think ‘Shut up!’” As Wells explains, some of his greatest influences are things he hates. “I think a lot of people are the same, you know, ‘that annoys me so much I have to react.’ I quite like the idea of taking the piss out of it in a relatively subtle way.” In Wells’ song Kohler’s cheerful refrain of “What a world, what a life!” is twisted into something altogether darker, with the string around the protagonist’s finger becoming a noose around their neck.

Such juxtapositions can also serve to bring light to darkness. ‘Move’ is a vivid portrait of depression, where the protagonist spends all day in bed, listening to the sounds of helicopters buzzing overhead. Yet Wells animates the song with bossa nova guitar and clave rhythms, creating an effect that is, depending how you read it, ironic or uplifting. “It appears as a bit of a joke, but in fact it’s what actually made the song work for me, because I’d been working on it for a while and I couldn’t quite get the chorus to come out. And then I realised that if I put that kind of Latin rhythm on it, which is obviously in complete contradiction to the lyric, it actually made it work.”

In addition to the ten Wells originals and a new version of the Aidan Moffat collaboration ‘Far From You’, Standards Vol. IV features a cover of Richard Youngs’ ‘Summer “Summer’s Edge” from the latters’s 2005 masterpiece Summer Wanderer. Wells has known Youngs since the 1990s, when they worked together with Future Pilot AKA. “There’s a few people for whom you can justifiably use the word genius and I think Richard is one,” he declares. “Again it was to do with Kate’s voice and that song suited her voice so well. It’s actually quite a radical reinterpretation. The original is a capella, so it gave me that space in which I could do something that was very much my own.” The National Jazz Trio’s version taps into the uncanny pastoralism of the original, with Sudgen’s clear reading of the melody set against Wells’ glistening keyboard samples. “It’s one of my signature sounds,” Wells adds. It comes from a sample library he and Vulliamy recorded with Teenage Fanclub’s Norman Blake a few years ago. “They’re all natural sounds, but they’ve been mutated. We’ve been using them on all the albums. I want something to sound like it’s my own, so that’s as close to making my own instrument as I can get. I like the fact that even though it’s on a computer it’s not going to be too precise.” That human quality shines through Standards Vol. IV, an album characterised by its gorgeous blend of sophistication and vulnerability.