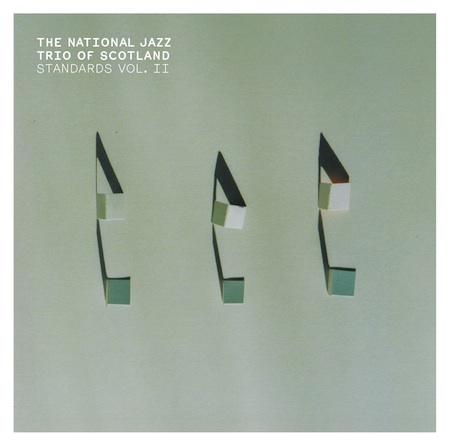 Just for the record, The National Jazz Trio of Scotland don’t play jazz, nor are they a trio. And while their status as national ambassadors is not exactly official, Bill Wells has however worked with many of the key players in the Scottish indie scene from the likes of Isobel Campbell and Future Pilot AKA to the magnificent collaboration with former Arab Strap vocalist Aidan Moffat „Everything’s Getting Older“ on Chemikal Underground recently. Indeed a host of Glasgow’s finest have contributed to the new NJTOS album Standards Volume Two with Norman Blake from Teenage Fanclub responsible for additional studio work and lending his voice to Winter Breaks And Back To Spring. Belle & Sebastian’s Chris Geddes and Stevie Jackson also helped with recordings. Jackson of course was responsible for the stunning harmonica performances on Well’s former ensemble, the Bill Wells Trio whose album Also In White on The Pastels’ Geographic imprint remains a seminal masterpiece.
Yet despite these impressive rock solid credentials and all the big names with whom Wells works, what sets the National Jazz Trio of Scotland apart is the vocal performances by Lorna Gilfedder, Aby Vulliamy and Kate Sugden. While these girls may not be professional singers their voices posses an honest quality which fits Well’s compositions to a t. The sparse arrangements are understated yet outspoken while the lyrics tell of everyday moments few take the time to reflect on, with titles such as the opener We Grow Accustomed and This Is What You Could Have Won. The National Jazz Trio of Scotland’s music is sublime in in the way it works on the soul especially after repeated listening. Seeing as Bill Well’s has worked with everyone from Jim O’Rourke – on the 2011 album Lemondale – to avant-garde saxophonist Lol Coxhill his move to work with unknown singers on NJTOS lends a delightful freshness to the project. The songs walk a fine emotional line between melancholy and optimism, as demonstrated in the contrast between the songs Hillwalk and Chance. Though the majority of the songs on Standards Volume Two are written and composed entirely by Bill Wells, there are 2 covers including a version of the traditional Scottish folk song Mary of Argyle and a delightful cover of the Moondog tune My Tiny Butterfly with Gilfedder, Vulliamy and Sugden singing in a round to great effect. Singer Lorna Gilfedder also wrote lyrics to Snowed In, a song that from its title at least would not have been out of place on the ensemble’s previous record, the Christmas Album. Standards Volume Two draws Unexpectedly to a close with a lilting waltz.

Already his fifth album on Karaoke Kalk following the Christmas Album and including previous collaborations with Stefan Schneider aka Mapstation (the bassist from To Rococo Rot), Barbara Morgenstern and the Japanese improvised free-jazz ensemble Maher Shalal Hash Baz, Standards Volume Two marks another milestone release for the Glaswegian musician. And what with this being The National Jazz Trio of Scotland’s second release in less than a year on Kalk, this is clearly a lasting ensemble with a lot to say. Here’s looking forward to future volumes.