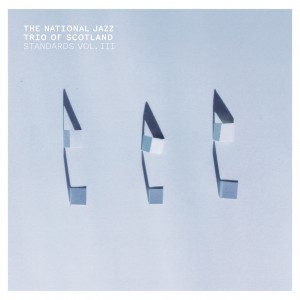 LP Includes A Free Download Voucher For The CD Album

“I sometimes wonder if I’m going in reverse, having started with the larger, more free improvisational ensembles and now getting down to a vocal pop band, but it’s one thing I was always aiming to do,” says Bill Wells on his current position with the National Jazz Trio Of Scotland. And if one is to take heed of the age-old advice of not judging a book by its cover, then it’s wise to also apply that caution to CDs, for the group is neither jazz nor a trio, although it is at least partly Scottish.

Wells has been part of the Scottish Jazz scene since the late 80s, but has always enjoyed working with musicians in the Indie sector, including stints as a collaborator and arranger with Isobel Campbell, Jad Fair, Kevin Ayers, Future Pilot AKA and Japanese naivists Maher Shalal Hash Baz. He also worked with German electronica artists Stefan Schneider and Barbara Morgenstern and recorded Lemondale, an experimental, pop-tinged collection recorded with an eclectic cast of local musicians in Japan in 2011.

The National Jazz Trio Of Scotland consists of Wells on samples, with a trio of female vocalists: Aby Vulliamy, Kate Sugden and Lorna Gilfedder. Onstage, Aby plays viola, Kate marimba and other potential live players include Teenage Fanclub guitarist Norman Blake and Babe vocalist Gerard Black. The group’s name may be Wells’ droll way of blowing a raspberry at the Scottish jazz establishment he feels has overlooked him in the past, but doesn’t he think that such a deliberately misrepresentative group name could prove a problem?

“I beg to differ,” he responds. “I think in the short term it’s making life a bit harder, but hopefully in the long term it will make it stand out.”

The group’s debut recording The National Jazz Trio Of Scotland’s Christmas Album, was released in late 2012, followed by Standards Vol II in 2013. Their new album is titled Standards Vol III, although the description isn’t strictly accurate. “Well it’s partly a nod towards the more standard way of songwriting, although structurally most of these songs aren’t actually written in a similar way,” he says. “To me the best ideas are strong melodies on interesting changes, going back to the classic songwriters. It’s a pretty old fashioned idea and I don’t think that it’s the way that most people write these days when using computers.”

Wells’ music had always been hallmarked by a directness and economy of musical line, and the fact that his pop music is pared down to just vocals and a lean musical accompaniment is, in fact, one of its strengths.

“I do seem to like a sparser sound,” he admits. “For one thing, I’m not that keen on drums. There are no drums at all on Vol II. I relented a bit on Vol III, but even then there’s not that much. I like things kind of light and airy. As long as they are moving along nicely and you can hear the chords, and the voice is well supported, I think that’s about all you need.”

Wells wrote all the songs on the album with the exception of the Beach Boys’ “With Me Tonight” and the lyrics to “Surprising Word”, written by Saya from the Japanese band, Tenniscoats, and “Trying To Escape You”, written by Lorna Gilfedder.

The material on Standards Vol III hints at a diverse range of influences: the bossa nova of Antonio Carlos Jobim, the simple piano accompaniment of Brian Wilson, and the wider vocabulary of chord changes in the songs of Laura Nyro and in Todd Rundgren’s earlier work. Wells also admits that some of his electronica may well be influenced by Stefan Schneider’s work with Mapstation. And as he plays samples, Wells is keen that his soundworld avoids anything too generic, and that there is a little bit of grit in the mix.

“Although there are a very few more conventional samples in there, for the most part I use samples that Norman Blake originally recorded of my guitar, bass and Aby’s viola, so that gives it all, hopefully, a very original and distinctive sound. It also means that it’s computer-based, but it’s not too squeaky clean or slick as the samples are not factory presets, and still have slight tuning, editing and rhythmic discrepancies.”

One of the most striking aspects of Standards Vol III is its mix of pure-toned singing and cryptic, bittersweet, sometimes darkly humorous lyrics, as on the twinkly, musical box-like “Unguarded Moment”, with the lines, “Got me when I least expected/Found it where I didn’t look/Hit me like a block of concrete on a hook.”

On “Alive And Well”, rather than being metaphorical or a fanciful notion, the lines, “It’s been the hottest summer that we’ve had for a while/The shower isn’t working because of a broken tile,” were an accurate summary of the facilities in the bathroom of Wells’ Glasgow tenement home last year, where the album was recorded.

“The kitchen table is where I have my computer set up, so it’s my HQ,” he reveals. “The acoustics aren’t that good, plus I have to record avoiding slamming doors, the upstairs neighbours simply walking about, or the woman who lives below shouting at her dogs – or her partner, which sounds the same. However, it means I can make records very cheaply, and at my leisure – although that word seems a bit wrong. And for me these National Jazz Trio Of Scotland records are probably the closest I’ve got to doing something as I intended.”