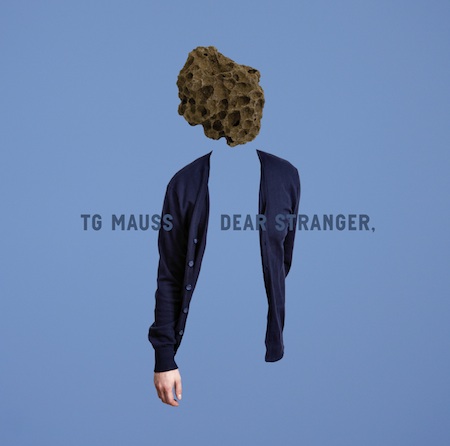 Dear Stranger, is the third full length album by TG Mauss following his previous two long players Mechanical Eye and Gravity Will Keep Us All Together on the Belgian label Quatermass. The man from Düsseldorf also known as Torsten Mauss has been releasing records as TG Mauss since 2005 before which he put out several Eps under his early Twig moniker.

This truly incomparable album opens with the unexpected combination of vocoder and what sounds like nothing less than pagpipes on OMG. We miss out Monday but come up smiling on Tuesday, a song which fuses atmospheric pop, noise drones and arpeggiated synths. Welcome conveys elements of post-rock, not least of all in the distinctive drumming sound. Besides his TG Mauss solo endeavours Mauss also plays keyboards in the Sølyst project together with Thomas Klein, the drummer from Kreidler. Their project has recently released its second album on Hamburg label Bureau B and live shows have seen them play with Mouse On Mars at Berghain in Berlin and as far afield as St. Petersburg. This live drumming sound is also the driving force on Ghosts, a downbeat ballad slightly reminiscent of Tarwater in its delicate vocal style and percussive element.
The instrumental interlude Im A Child is a pleasant forray into experimentalism and despite the title, proves with the use of ambient drones TG Mauss has a very high level of musical maturity. Don’t Argue picks up the tempo again and its clear from the meticulous electronic production and driving rhythm why Mauss was selected to remix the likes of Karaoke Kalk labelmates Roman and Hauschka among others. Of course TG Mauss’s collaboration with Volker Bertelmann aka Hauschka goes back further than that: to their Tonetraeger project via which they have released several albums and movie soundtracks.
The title track of the album exchanges the electric guitar for an acoustic six string, giving the song Dear Stranger a distinctly folk feel; this gentlly meandering drift even features the delightful sound of a recorder. Sun King is of course not a cover of the Lennon-McCartney composition from Abbey Road, rather it bears that TG Mauss signature sound that is by now no stranger to the ear. The penultimate tune Dark is actually light in timbre and mood – the meditative loop purveys an anthemic majesty. And Dear Stranger, draws to a modest close with Circle Lane, a delightful song rounded off with pizzicato plucked chords and some lovely lazy slide guitar.

Dear Stranger, is musically diverse enough to appeal to fans of electronica and post rock as well as singer-songwriting and folk-rock. The album revokes the old saying about not speaking to strangers; one listen to TG Mauss and you will want to get to know him better.