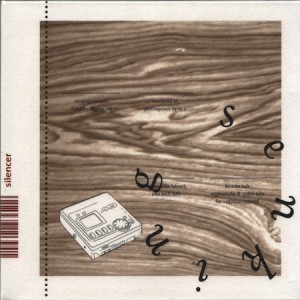 cd catalogue number nine. making it the twenty-sixth karaoke kalk release all in all. out of those, fifteen are by jens massel – or his three alter egos: senking, kandis and fumble. just for the statistics. the name senking initially only appeared in track titles – as on the first
two kandis records, being as it were also the very first releases on kalk.
senking eventually grew into an independent project, now on one level with
fumble and kandis.
it’s those small things that can tell us a lot about jens massel. look at
the track titles, at the different moods he creates on his records, at the
cover artwork that is being modified just a little with every release and that also changes with his different projects.
jens massel’s discography, therefore, reads almost like a biography. a
biography though, that does without words, without lyrics, and works on a
purely musical basis. the language of music itself suffices, its
expressiveness clear and telling to a point where it becomes narration,
tells a story. this is one of the most wonderful traits of jens massel and
senking: the narrative in music.
now silencer, it’s exactly what it promises to be. an album that exists
through silence, revolves around silence. a silence which is continually
broken – almost imperceptibly – by a distant, steady and not even very restrained throbbing beat that dies away as unnoticed as it came
alive. thus silencer resonates with moments of surprise that first of all
call for one thing: close listening. if you really want to know everything
this album is able to tell you, that is.