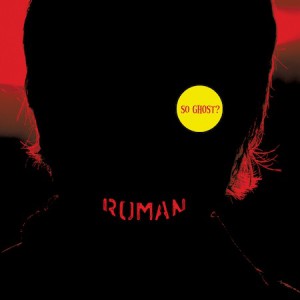 Describing this music without using superlatives is impossible. With “so ghost?” the Cologne musician Roman has succeeded in squaring the circle, that is he has created pure genuine pathos. Nobody’s ever thought this possible and how could they know better? Great pop meets great gesture – Roman’s music is enthusiastically raised arms waving from every corner. But then again it’s more than just that: giving simple judgements about “so ghost?” is not so easy. See, we’re dealing with a highly demanding Janus-headlike album that is changing its face with every track. Concernig his sounds and arrange- ments Roman turns out to be a true dare-devil. Female choirs, over-amplified basses, staked-out keyboards and fan’s noises from the background contrast with professional a capella interludes. And overlaying everything is this voice somewhere between Aztec Camera, Style Council and U2.
Under the reign of Roman’s honey-sweet bariton the tracks are living a merry life of their own. An acoustic guitar (slightly out of tune) meets plastic synthies and a bolting drum computer. Roman is capable of just everything: in the twinkle of an eye he skillfully arranges the most beautiful string themes just to tear the whole thing to pieces again with a Gameboy’s buzzing noises. And despite all its pomp and glory “so ghost?” still preserves the d.i.y. charm of the bedroom production. Is this still common sense? Has he ever asked the permission of the contemporary pop-intelligentsia? Probably not. “so ghost?” is bold and cheeky to the extent where impudence becomes pure pleasure. Roman is completely lacking the alleged virtue of courteous modesty. He does not fear nor hide his own greatness. With the most superiour self-consciousness genuine club-stompers shake hands with sambaesque romances. Much of this isn’t meant too serious and so nonchalant it proves Roman’s got a good deal of ironic self-distance. Anyway he is not afraid of allowing silliness to his music. But his voice is giving the impression of seriousness with every note it sings. This music is referring to nothing else but itself. Or at least no appropriate references will come to our minds. We wish Roman all the waved lighters, thrown-to-the-stage teddy bears and swimming-in-tears girls’ eyes this world has to give. See, he’s just earned it.