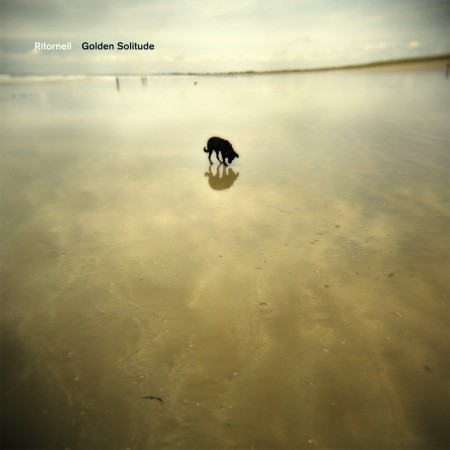 ﻿Karaoke Kalk’s head Thorsten Lütz first met young Austrian Richard Eigner back in 2006. That was in Melbourne during the Red Bull Music Academy. They got along with each other instantly and stayed in touch. So much the more Thorsten’s looking forward to the release of the experimental musician on his very own label in february 2009. Eigner’s »Golden Solitude« is a collaboration with pianist and fellow countryman Roman Gerold. Eigner and Gerold had already worked together on the music for the dance performance »Urgent Appetite« by Canadian choreographer Laura Kappel.

»Golden Solitude« ranges between cheerful dance tunes and highbrow audible music. Very playful, but yet respectful, Ritornell are exploring the aesthetical achievements of the 20th century and experiment casually with bits and pieces from pop culture. With lots of flair they mix acoustical elements with electronic sounds and create an album that, even after repeated listening, preserves its shimmering on the edge between pop and avant-garde. As to the technical polish of this fresh emulsion of sounds, the duo was assisted by Patrick Pulsinger. Eigner & Gerold’s subtle tracks were employed in numerous movies. Thus, amongst others, the Canadian director Bruce LaBruce used the composition »Concrete Leaves« for his melancholic zombie flick »Otto; Or, Up With Dead People«.

Richard Eigner, born in Linz in 1983, works mainly as a composer and sound-artist, but he has also contributed as a drummer to various productions, such as Patrick Wolf’s album »Magic Position«. In 2005 he won the Elektronikland award for experimental electronic music. Besides quite a few other musical projects he is managing his own label, Wald Entertainment.

Roman Gerold, an awardee himself and born the same year as Eigner, has been working as a pianist for various jazz bands in Austria between 1996 and 2003. In 2002 he began studying multimedia-art in Salzburg and changed to German philology in 2006. He’s composing his music freelance for theatre and film. Live Ritornell showcase their material as a electro-acoustic trio together with Gerhard Daurer. They focus on improvisation with a very reduced instrumental set up. While Gerhard Daurer maxes out the possibilities of his specially devised gamepad-granular-synthesizer, Roman Gerold is adding subtle melodies and vivid drones as well as processing the live-inputs of the acoustic instruments. Richard Eigner again provides the electronic improvisations with fine acoustic rhythms and textures, playing his ride-cymbal with the use of diverse utensils such as bass bows, sizzle-chains or a toilet brush.

»Golden Solitude« provides the listener with a modern and extremely human sound experience that unites passion and irony.