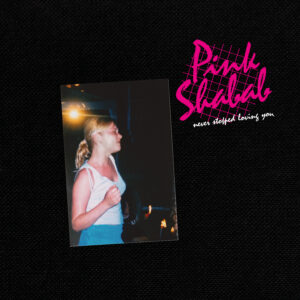 Joseph Carvell returns to Karaoke Kalk with his sophomore album under the Pink Shabab moniker. »Never Stopped Loving You« was for the most part written between Spring and late Summer 2020 in his Camberwell home and like his 2019 debut »Ema by the Sea« recorded in the South of France together with Emmanuel Mario, better known as Astrobal. It’s a record informed by feelings of nostalgia, love, longing, romance and loss and, much like his previous album, displays Carvell’s knack for making introversion sound extroverted. As a bassist, his approach to songwriting is both rhythmic and melodic, making the resulting music just as visceral as it is emotive. Much like the record’s title can be understood as both a lament or an expression of joyful dedication, the music on »Never Stopped Loving You« is profoundly ambiguous.

»I was lucky with the timing for this record,« says Carvell and at first that may sound counterintuitive: managing to play only one show in Zurich in early 2020, he had to cancel his planned European tour and go back to the United Kingdom, which soon went into lockdown. He made the best out of the situation, recording electric and upright bass for Nick Krgovich, Daniel O’Sullivan and Zooey’s new records while also working on tracks and demos by himself. »The world seemed to have stopped and I had more time to think about the past and find the best grooves, the suitable keyboard touches and the right words,« says Carvell. Everything came together slowly before he boarded a train to France with his keyboard: »The pace of life completely dropped and between takes Ema and I were going swimming and taking walks,« he says of the sessions.

»Never Stopped Loving You« is notably more electronic than its predecessor, but also full of the small melodic and harmonic details that made »Ema by the Sea« such an outstanding record. »I was listening to more 1990s dance and house music and 1980s pop and also a healthy amount of ambient music,« explains Carvell. These influences are clearly audible on songs like the Chicago House-esque beats of »Show Your Love« or »Why Did I Leave You that Morning,« the skittish rhythms on »Let Go« and the near-Balearic »San Junipero.« Especially the latter makes it clear that Carvell spent much time devoting himself to movies and TV shows, but also incorporated more piano sounds in his songs—he learnt the instrument by playing along to classic Beatles and Beach Boys songs.

Despite being more upbeat on a rhythmic level than before, Carvell’s use of texture and his peculiar voice add another note to the music. Even an anthemic song like »Run Away,« his first composition to follow a classic verse/chorus structure, is profoundly ambivalent, both overjoyed and deeply melancholic. By the same token however, even a torch song like »You Stepped Out of My Life« is enormously consoling. This, after all, has always been Carvell’s strength: creating music that will cheer you up when you’re down while also injecting a sense of futility into every moment of euphoria. It never shone more brightly than on »Never Stopped Loving You.«