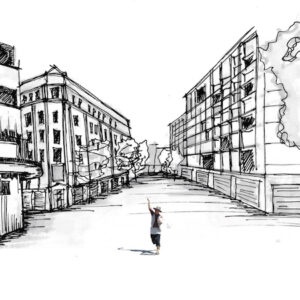 Does returning to a place have a sound? Can the ear have a memory? And what if places which we return to are just empty shells? Choreographed rooms which we need to play, fill from scratch each time with fragments from the past and present, layer upon layer, familiar and still somehow always new and differently assembled. Paula Schopf’s Espacios en Soledad are acoustic walks around present day Santiago de Chile, the city where she was born – which she always left, had to leave and to which she always returns – but more than anything also through her own memories which resonate throughout the public places, squares, streets though still in their own way remain strange.

„Every immigrant in the world has a piece like this – a kind of missing link, something which is incomplete. And every time one returns to the home country you are looking for it. For me it was a matter of sound.“ (Paula 2019).

In the mid 70s leaving Santiago was a flight of exile as a child with her family. Leaving in 1990 was an autonomous decision to head for Europe, Berlin, where the wall fell, where the heavens opened up all at once and electronic music became a kind of new home to so many. Paula Schopf belonged there. For her the Ocean Club at Tresor club was a central place where friends and mentors like Gudrun Gut and Thomas Fehlmann made it possible for her to get really into it. Dancing, being and feeling your body, forgetting oneself in the bass and beats, who one is and where one’s from, to becoming the DJ Chica Paula. Chile was very far away during this time, Latin America was more just a code, a musical and habitual cliche to be cautious of. This was especially true for the culture of the Chilean exile, the pathos of the “Canto Nuevo”, the sound and ideologically charged instruments of the „música andina“, for example the Zampoña, Quena or Charango. Techno was the greatest thinkable alternative to this even if or perhaps because so many kids exiled from Chile became key figures in the German and European scene: Ricardo Villalobos, Dandy Jack, Cristian Vogel, Matias Aguayo and many more.

How does returning to a place sound? Does the ear have its own memory? The field recordings which were recorded in Santiago de Chile in 2016 and form the central sonic material for Espacios en Soledad represent the paradox for Schopf’s return to her home country after emigrating: the inevitable drifting apart of her own lived time from that of her former home. Already the Venezuelan and Colombian hawkers are unmistakable signs of the deep change in Chilean society which has happened in recent years due to immigration. Which is in contrast to the old lady who sits on the floor in a pedestrian zone and without break sings the same three songs by Violeta Parra and then keeps falling asleep while doing so. The fragile presence of her voice is joined with a repertoire which is almost mythologically timeless in Chile in a particularly moving way.

By layering, ordering and conjoining such found sounds from modern day Santiago this piece become about the urban sound of Chile’s present. But more than anything by doing this Paula Schopf becomes an arranger of her own sonic memory or sound-triggered memories of returning to this city. Just as techno and Berlin helped her for such a long time to get away from too strong of an identification as a Chilean in exil, now with Espacios en Soledad she has found a way to bring these two seemingly disparate lives and remembered worlds together.