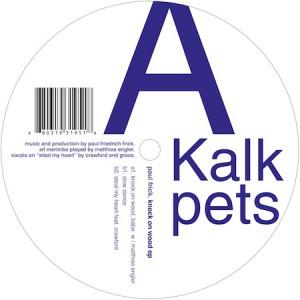 Some months ago, back in 2007, producer and musician Paul Frick released his first solo house EP “Do Something” on Kalk Pets and scored quite a success with it. His new EP “Knock On Wood” is up to shake the dancefloors of technoid soul even more. The Berliner presents us with three extraordinary sound set-ups: “Slow Dance” is a track that doesn’t neccessarily incite cuddlesome swaying but strains your legs much more than the title suggests. The title track “Knock On Wood, Babe” features Matthias Engler on the marimbaphone. Engler and Frick are occasional collaborators in the field of experimental music. The classical trained percussionist is cofounder of the “adapter” ensemble and plays (among others) with the “Ensemble Modern” (that might be known even to popfans through its collaboration with Frank Zappa in 1992). Frick’s previous ardour for popmusic is represented by his catchy sound-collages. The third track on the EP, „Steal My Heart“, consists exclusively of “stolen” sounds that he sampled from other artists. Crawford, known and fancied by Berlin’s club scene for his eclectic DJ sets, comments very charmingly on every new sound, revealing who it was sampled from. So the systematic sound rip-off is to be understood as a homage to the artists that are stolen from.

A1. Knock On Wood, Babe W/Matthias Engler B1. Slow Dance B2. Steal My Heart Feat. Crawford