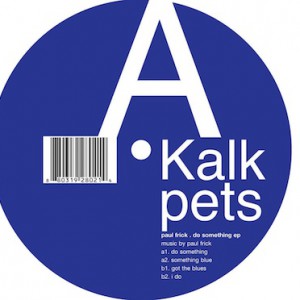 As a studied composer native Berliner Paul Frick is predominantly writing experimental music for classical instruments.In addition to that he’s producing music for theatre, radio plays and experimental improvisation. It is only through his assistance in “konsens”, a producer team and audiovisual live act, that he has come to electronic music. Now he’s laying on a fine 4 track ep on kalk pets. Soul-breathing and yet reiterative house music, hypnotic and sometimes technoid. The classically produced tracks get their sinews from a particular state of hovering. A spark of melancholy resonates, but instead of loftily diffusing it arrives at a condensed lightness. Many organic resp. accoustic sounds are used. Some of these sounds have been sampled from earlier compositions of Frick’s for classical instruments, again others he has recorded directly for the album. A brilliant debut album of the young Berlin producer.