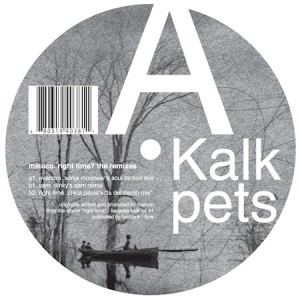 Max Loderbauer, Pier Bucci and Argenis Brito most recently presented us with their sun-drenched acoustic showers under the name of Maluco on Karaoke Kalk in 2008.  For spring 2009 the trio’s south-american sounds have now been remodelled  into brandnew electronic dance mixes  by three very diligent, and indeed very striking ladies.

First up is the almost 10 minutes-long Soul-Friction Remix of “Evandro” by Sonja Moonear. Native of Switzerland she is in great demand as a DJane as well as a prudent producer of monumental techno music. She is also one creative half of the electronic live-duo Junction SM who call the label Kalk Pets their home and have released their debut back in August 2006 (Kalk Pets 6).

Dinky aka DJ Dinky is reviving the fresh sound of “Sam”. The native Chilean is a true globetrotter, currently living in Berlin, where she runs her own label Horizontal. Her most recent longplayer “May Be Later” has been released on Vakant in autumn 2008 and is utterly beautiful, like the soundtrack of some sublime travel documentary. An exotic adventure in the midst of a big city.

Last but not least Chica Paula is delighting us with her “La Del Barrio” version of “Right Time”, testing the mind with such a relaxed sound that there’s just no time for moping about. The Maluco-rush isn’t at all a new arena for the chilean musician: Together with Max Loderbauer she is known as Chica and the Folder, an electronic indie-duo who has latest played live at the 10th anniversary party of the Monika label at Volksbühne, Berlin, in 2007. Chica Paula has already released a remix for Donna Regina (Karaoke Kalk artists themselves) on Kalk Pets 13 and a solo 12″ on Kalk Pets is soon to appear…

A1. Harmonic Steel B1. Egokiller B2. Ghost Woman