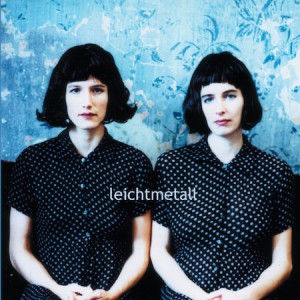 „leichtmetall“ represents a series of fine debut albums that were released quite recently on karaoke kalk. behind the name there are two women – marion dimbath, whom some might still know from when she was with the merricks, and nicola schüpferling. both bandmates come from munich and in this context the sound of their album cer- tainly comes as a surprise at first listening. it is in particular the original use of the xylophone/ the chimes that attracts the attention, setting to a great extent both melody and mood of the twelve tracks. leichtmetall’s songs are plainly about the ups and downs of every day life but without being simply placative.
their style of interpretation and their lyrics vaguely remind of some of the more literature-chanson-influenced releases on the belgian label „les disques du crepuscule“ and even more they are connected to old chansons from the thirties. this comparison merely being an approach. the seemingly cooled down voice that is singing along to the genuine sound of the xylophone is used rather as a concious stylistic device than it is really emotionless towards the contents it is presenting. leichtmetall are using this device with a sovereignity and a consequence that clearly make their album and their unconventional musical idea standing apart from present developments within electronic music. the album is thus demonstrating that there are enough ways of moving people through music that does not imply superficialness, cheap gimmicks or fiddly sounds and it is simultanously enrichening musical development with a new aspect.