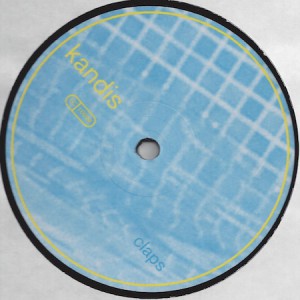 do you wonder sometimes how fast the time passes away? or how it slows down? do you like to complain about the lack and weakness of the nature? are tardiness and delay your constant companions?
never say die! your favorite company karaoke kalk took its time sole to prove now with its 10th release in this century, that a fine record is far more important than all the almanacs, calendars and clockworks around the world, isn´t it !?
for certain it was the time for a new kandis. to revel in all the
emphatic beautiness of claps, you should spend some leisure-time. not for nothing the artist named his second track waiting and speaks of his readaptation of the old kandis favorite luna corona. and if it wasn´t forbitten to compare to, it would remind me of something really grand to make an even greater compliment to this infatuated fragile and melancholy singing. give it just some time…
from the charming title track claps we get to moving. so wasted enough time – movement is not only the true physical energy, but it also rests in this magic song. and if it wasn´t forbitten to compare to, …
after all pass your time with the bewitching outro, the last lump of
kandis on a truly timeless jubilee edition of karaoke kalk.
inside us here´s the time, around us there´s the space.