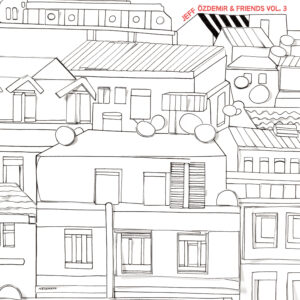 In the past years, the multi-instrumentalist, composer, producer and music enthusiast Jeff Özdemir had been focusing on organising the Live-Mixtape series in Berlin, inviting numerous artists to join him on stage for every single event. However, the year 2020 put an end to this for all the painfully obvious and obviously painful reasons. Undeterred, he instead put together the third instalment of the »Jeff Özdemir & Friends« series, working with singers, musicians and groups such as Knarf Rellöm & DJ Patex, F.S. Blumm, Joanna Gemma Auguri, Elke Brauweiler and Elmer Kussiac for an 18-track … Now, is this a compilation or an artist album? Well, why just either this or that when it can just be both at once? This is »Jeff Özdemir & Friends Vol. 3« after all, emphasis on »&«.

Released on Karaoke Kalk like its two predecessors from the years 2015 and 2017, respectively, »Jeff Özdemir & Friends Vol. 3« sees the man behind Kreuzberg’s 33rpm record store and the 33rpm Records label showcase his qualities as a people remixer, songwriter and versatile musician. He put together a collection of groovy tunes picking up on funk and afrobeat rhythms, introspective ballads, a musically channeled punk attitude, shoegaze sentiments, spoken word passages, drones, glockenspiel sounds, seriously fun experimentation and much more. Just like on the cover artwork – courtesy of Marion Eichmann, Özdemir’s favourite visual artist – everything here seems to discreetly exist for itself while being tightly connected to everything else at same time.

While artists like Ertan Doğancı, Désolé Léo, eng°n, F.S. Blumm and Zap have been long-term collaborators of Özdemir and were featured on previous instalments of the »Jeff Özdemir & Friends« series, new faces and forces also enter the mix. The melancholic »Love Letters« for example marks the first (though hopefully not last) collaboration with singer Joanna Gemm Auguri, while Knarf Rellöm & DJ Patex’s appearance has been dreamt of collectively but hasn’t been fully realised until now.

Whether it’s Désolé Léo’s French crooner soul, the lo-fi synth pop song »Bored« featuring former Commercial Breakup singer Elke Brauweiler or the many different sounds and styles presented under the name Jeff Özdemir: no decision is ever made between either that or this musical direction, but all are being joyfully enjoyed together. Thus, throughout its 70 minutes, the stylistic diversity of »Jeff Özdemir & Friends Vol. 3« does not once border on randomness. Instead, these sometimes very different songs are marked by a shared atmosphere – a direct result of these very different musicians approaching their studio time together less as a chance to make music but more of a chance to carefully listen to and interact with each other.

Just like you’d expect it from someone deeply connected with the local music community who also happens to run a record store, Özdemir is also the kind of person who’ll hand you the worn copy of a record he has just fished out from the bargain bin because he knows about its potential to change your life. The contributions by Vackrow (»Kleistpark«), Gebrüder Teichmann’s old band BeigeGT (»Disco«), and Otto von Bismarck (»Zu viele Erinnerungen«, produced by The Whitest Boy Alive’s Daniel Nentwig) do not even feature Özdemir, but are simply musical pearls that were (almost) lost in the shuffle of music history and unearthed for this very special occasion. That’s just what friends do, don’t they?