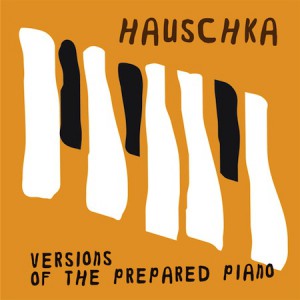 How do you remix a “piano solo”? The fragile experiments on Hauschka’s “Prepared Piano” have opened many ears last autumn to the plenty sound-possibilities of a piano. The tracks reminded of the by far not exhausted capabilities of an instrument the boom of which is continuing for almost 300 years now since François Couperin published his piano tutor „L árt de toucher le clavecin“ back in 1716.

And somehow this chest of keys again and again manages to transpose itself to the here and now. Its peculiar tone, its fine yet ever and anon brute sounds are never fungible and bear their own distinct qualities – qualities that after all reveal a lot of the instrument itself, its player and the composer. And this is why Hauschka started his experiment: He selected different musicians who each picked up one of his compositions as a basis. The results transgress the boundaries of ordinary remixes: material being added en masse, Hauschka’s complete, perfected works all at once function as basic tracks on which more and more layers are stacked. This can be at times opulent as with Vert or tranquil as with for example Èglantine Gouzy.

One thing’s for sure: these “revisions” or “versions” asked a lot of everyone involved. It wasn’t about simply putting melodies on a straight minimal track – Hauschka’s piano rather integrates itself as both a rhythmic and melodic element or presets the conditions. TG Mauss’ melancholic pop track demonstrates this procedure to an almost exemplary extent. We are dealing with something quite extraordinary here as we’re confronted with something that both functions beautifully in itself and – being constantly in comparison with the original – reveals something of the art of compositon and arranging.

Hauschka himself changes one track into a sensitive Beach Boys experiment.
Nobukazu Takemura introduces new territory to the impressionistic texture of “Kein Wort” with his chirps and dissonances. When Hauschka initiated his project he directed his attention on the possiblity of the editors to sing on his tracks. Now Takemura’s and Frank Bretschneider’s non-vocal versions add space on the album and hint on wholly different possibilities of handling the original material.

This is piano pop different from Elton John, Bruce Hornsby or Ben Folds – it is stretching sound to the mesmerizing tones of a Takeo Toyama and Wechsel Garland. Sometines Hauschka is featured in the background as with Barbara Morgenstern or sometimes he is the lone accompanist as with Mira Calix. Chica and the Folder then make it completely impossible to divide the different complements. Tarwater then accompony you to the home of the prepared piano: “He wonders how far he had travelled” they sing. Indeed, this album represents a long journey to most astonishing places.

With “Room to Expand” Hauschka is gonna release a new solo-album on Fat Cat Feb 19th, 2007, once more tracing in his own way the lessons and the pure beauty.