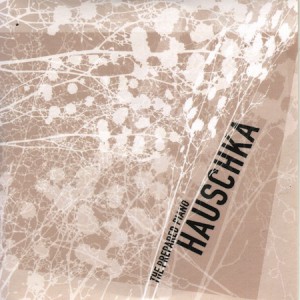 Like a child? A masterpiece of crafts, the so called hammer-string-mechanics of the grand piano, makes a little hammer strike a tightened string. Its length, perimeter and tension have been designed with expert precision, they determine its very particular pitch. The well-constructed body of the grand piano is resounding the vibration: the sounding of a pure tone. It is the result of a long tradition in constructing instruments, generations have been researching and working to perfect it. Everything has been reached, you could state, a perfected instrument only waiting for a gifted virtuoso to play on it. Alas, you could change the rules of the game, and that’s just what’s interesting Hauschka, not at all unexperienced himself. Tracing back his roots, he’s discovering Henry Cowell, the contemporary of Bartok’s, who has been picking the strings of his piano as if was a zither. Californian Cowell has been influencing John Cage – who redefined the rules of piano sounds and -playing – with his own experiments. He’s clamping bolts and screws in between the strings, little pieces of plastic or just rubber gums fulfilling the same function, all that creating further new sounds. Besides he’s arranging odds and ends on the strings: plates, journals, pieces of metal – they all add new percussive elments to the sound. What has been asserted a problem of the hammer-piano ever since it was invented – actually having to deal with a pure percussion instrument – is now redifined a possibility by Cage. With playful elegance he’s handling the pro- blem of percussion and is receiving new answers whose forms and sounds remind very much of indonesian Gamelan orchesters. The rustling, drumming, harmonic with- sounding of the various objects have been consequently inspiring a whole bunch of composers, amongst them Arvo Pärt, Steffen Schleiermacher, Frangis Ali-Sade, Edison Denissow or Philip Corner who has been co-founding the Fluxus obsession with the grand-piano. But it would be too easy to locate the playful in the serious, not to say academic. What Fluxus has constantly been trying to untermine others have been succeeding in with a whole different kind of verve: In the 50ies Fritz Schulz-Reichel becomes a celebrity under the name of “Schräger Otto” redefining his piano as “Beschwipste Drahtkommode” (tipsy chest of drawers (wired)). His modified Ragtime sounds make him a huge success in the U.S., his name appearing in a Grateful Dead track even. Since then modified piano-hammers or strings appear as an effect in various pop music tracks. In the early 80ies U.S.-hipsters like The Flying Lizards or The Waitresses are experimenting with metallic resp. distorted sounds not denying their avantgarde-references. It is then when the modified piano echoes its last resemblance of a mechanic synthesizer, a quality that has been marked out in all its possibilities by the easy-listening duo Ferrante & Teicher at the beginning of their career. At the end their record company had to clarify that they really used only two pianos to create their sound-systems. Volker Bertelmann alias Hauschka is concentrating on just one piano and still there seems to be an entire orchestra accompanying him, too. Now and again he is allowing different sounds , the synthesizer makes its appearance, as it did already on his debut album, along with it go a drum computer or once an electric bass. But their sounds can easily be distinguished from those of the modified sound-body. Small rhythmic sound-vignettes or just quiet ballads who all have their roots in east-asian harmonies, e.g. minimal music, elaborate from the speakers. Sounds that you can’t get tired of listening to enrichen every track with something incomprehensible, something special. So what is it that’s sounding there? – Ideas, maybe spinning around Satie or Ravel, using the original qualities of the modified sound. Hauschka, is finding the possibili- ties in the techniques and uses them. He’s clamping vocal wedges of leather, felt or rubber between the strings, he’s preparing the hammers with aluminium paper or rough films, he’s placing crown corks on the strings, weaving guitar strings in, or pasting it off with gaffa. His resulting tracks are composed both originally and charmin- gly. Vivid, unconventional pieces made of playful research-enthusiasm. Is this the child in the musician? Sure – academically illuminated.