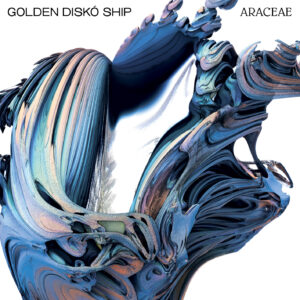 Theresa Stroetges has and always will be a traveler. Under the name Golden Diskó Ship or as a member of bands like Soft Grid or the improv collective Epiphany Now!, the Berlin-based multi-instrumentalist has continuously been moving through the fringes of experimental music, but also extensively explored the possibilities of tried and tested formulas – whether folk, rock, techno or pop. With her fourth solo album, her first for the Karaoke Kalk label, the Golden Diskó Ship is yet again venturing into unknown territory. »Araceae« is inspired by environmental changes and the eerie feelings that arise when faced with natural beauty – when everything seems perfect on the surface but something feels off underneath it all. As a whole, it is notably more focused on electronic grooves that provide the foundation for Stroetges’s poetic long-form storytelling.

Partially conceived during a residency in India, »Araceae« is the first Golden Diskó Ship record to feature two guest musicians. For »Wildly Floral, Slightly Damp,« Stroetges collaborated with percussionist Dripta Samajder who with his Sri Khol contributes complex rhythms to a driving beat that wouldn’t be out of place in the record bags of daring DJs. Sophia Trollmann takes over saxophone duties for »Ortolan,« a riveting coming-together of intricate, IDM-flavoured techno and jazz-inspired improvisation. Both are integral standout tracks on an album that clearly follows a holistic plan. Already the opener »Clouds of Neon Limelight« dips into anthemic synth pop territory, but unfolds into a great saga full of ominous undertones and Stroetges’s trademark: layered vocals that at once evoke feelings of uncanniness and intimacy.

It’s a juxtaposition that runs throughout »Araceae,« thus enforcing the album’s overall themes of sensual experience and alienation. »Game of Biryani« for example lends some of its musical structures from pop music, calling into question traditional songwriting conventions which here reappear as irritating echo effects rather than recycled old tropes. With the lush »Limping over the Prairies« and the adventurous »Glow-in-the-Dark Gloves,« Stroetges further challenges her audience by applying noise and a heavy dose of autotune respectively to disorientating effect.

The couple makes for an impressive finale of an album that scrutinises our ideas of what is natural – whether in music or the world around us. »Araceae« was inspired by the travels of its creator, but also sets out to ascertain what lies beyond everything that eyes or ears can perceive.