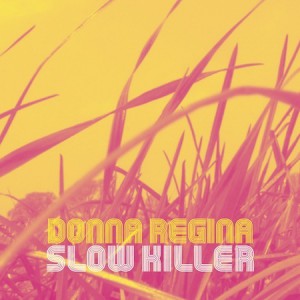 Donna Regina have opened the doors and stepped into the world. „Slow Killer“ is breathing of experiences in unusual places and the tender affection of their fans in foreign parts. And as coherently closed this fourth album may appear to you musicwise, it has been more open in the making than any other Donna Regina album before.
Since their last realease „Late“ in september 2003 Donna Regina and Günther Janssen together with their DJ and samples-trustee Steffen Irlinger have had more live appearances than in the preceding eleven years together, the halls being crowded in Salamanca just as much as in Porto or Paris, Warsaw and Buenos Aires. Their gig in the venerable auditory of the Polish broadcast has been transmitted live nation-wide, in Argentina even people from Chile and Brazil have been travelling to the capital to see their show. And the audience sang along to the tunes although Donna Regina albums have been on sale nowhere in South America.
„If you travel the world you get to know a lot of people“, says Regina Janssen. Thus, more new friends and old acquaintances have been participating in „Slow Killer“ than on any other release before. The french musician and producer Bertrand Burgalat – who among other things has set to music an album by and with Michel Houellebecq – has produced parts of „Lazy Heart“. Being an old fan of Donna Regina‘s he already has released a selection of songs from the last five years called „A Collection of little secrets“ on his Label Tricatel.
Sebastián Carreras has licensed the very same sampler for South America and his own label Indice Virgen. The musician and composer of the successful Argentinian trio Entre Rios has also written the lyrics of „Mirame, miraba“, which is Donna Regina‘s first track in Spanish and at the same time the first and only one that Regina Janssen hasn‘t been writing herself. Thomas Fehlmann, a very early fan of the band himself, always wanted to remix one of their songs, but Donna Regina have taken one step furt- her and asked him to produce „Enemy – No Enemy“.
With Pascal Schäfer a labelmate is playing the saxophone on two tracks and on „Mirame, miraba“ Theo Roos is playing the mouth organ. Günther Janssen has been col- laborating with Roos on various of his TV- and radio-productions.
Despite those collaborations nothing has changed in the principal working method itself however. With their sampled rhythms and analogue sounds, their swift and light changes from track to song and back Donna Regina are occupying a very own spot within the great world of pop music. And on „Slow Killer“ it has been arranged parti- cularly beautiful.
Christoph Biermann