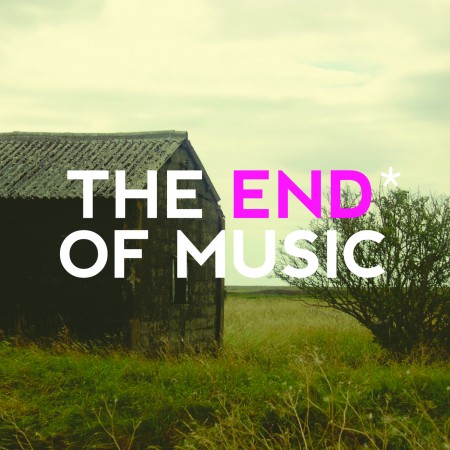 
The End* Of Music

The End of Music is the second full length album by Swedish group de la Mancha. At the core of the band are two childhood friends Jerker Lund and Dag Rosenqvist who founded the project back in 2003. A shared admiration for groups like Red House Painters, Sigur Rós, Led Zeppelin and My Bloody Valentine set out a general direction for the duo. And the band has stayed true to this tradition of leftfield pop-rock as The End of Music demonstrates most perfectly.

The album dives in at the deep end with a a brief intro, Golden Bells, which flows seemlessly into the straight up rocking number, Ursa Minor. Under A Leaden Sky is an epic orchestral ballad with strong dynamics. Again de la Mancha whose first release was an EP on Crying Bob Records in 2005, show their tremendous musical versatility on Hidden Mountains which quickly melts into a symphonic drone midway before tightening the reigns again at the very end, returning to the main refrain of the song.
There is no other word for Willow Lane than heart breaking. A stripped down arrangement of piano, vocals and organ make for an impact as powerful as any rock number. Equally fragile in its beauty is the sombre composition Erase. The song also relies for the most part on a very sparse instrumentation, but puts this to great effect.
Of course, the name de la Mancha is originally borrowed from Cervantes’ novel El ingenioso hidalgo don Quijote de la Mancha, perhaps better known as Don Quixote. But unlike the Spanish legend, de la Mancha are well aware of where they are going; they have a clear destination, as the penultimate number At Lands End proves. Clocking in at over 9 minutes, its the longest track on the album and marks our arrival at Til Gupu, a fitting close to The End of Music.

As with the bands first full-length album Atlas (Crying Bob Records, 2008), The End of Music is an album full of contrast and beauty. Each track has a clear identity and both the song-writing process as well as the production have been meticulously executes by Lund and Rosenqvist.
In addition to de la Mancha, Dag also keeps busy with his side project Jasper TX. Since his debut album back in 2005, Dag has been released albums on labels such as Miasmah (NO), Kning Disk (SE) and SMTG Limited (US). Over the years he has also collaborated with artists such as Machinefabriek, Mike Weis (from Zelienople) and Simon Scott (ex Slowdive) and in addition to that he’s done remixes for artists from a wide variety of genres. But its his collaboration with Jerker Lund in the form of de la Mancha that is the focus of 2012.

De la Mancha’s new album is a highly charged emotional record. The band is clearly at ease embracing the moody turbulence that other artists and genres try to avoid at all costs. There is a resolute depth and profound truth to all the songs on The End of Music; each contains a level of authenticity and honesty seldom found in pop these days. The album title itself bears something of an apocalyptic tone. But let’s hope we haven’t heard the last from de la Mancha.

*What we call the beginning is often the end. And to make an end is to make a beginning. The end is where we start from.

A1 Golden Bells A2 Ursa Minor A3 Under A Leaden Sky A4 Hidden Mountains A5 Willow Lane B1 Erase B2 What If Going Back Meant Coming Home? B3 For Family Digital Bonus Track 01. Til Gupu