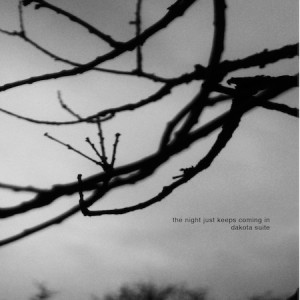 
The Night Just Keeps Coming In

Doleful melodies and melancholy wistfulness are the characteristics of Dakota Suite’s singer/songwriter Chris Hooson. They also constituted the main inspiration for the most recent album “The End Of Trying” which was released on Karaoke Kalk in early 2009.
The current release “The Night Just Keeps Coming In” is the legitimate follow-up to its predecessor, featuring mostly subdued sound animations, flowing piano harmonies and smooth cello arrangements. Mind you we’re not talking about a new Dakota Suite album but about a collection of adaptions and remixes, created and produced by an illustrious band of musicians, well-known protagonists in the spheres of classical composition as well as new electronic music. The mixture could be looked at as a remake, too. At any rate Hooson’s own label Navigators Yard has released a limited edition of 300 copies earlier in 2009. The original tracks recount the sorrow and the pain the composer from Leeds is suffering from. Without any vocals or guitars each song construes its own emotional history. The american cellist David Darling is contributing to the sublime atmosphere.
Artists such as Machinefabrik, Peter Broderick or The Boats breathe new life into the individual songs, amplifying either their gracefulness, as in Jasper Leyland’s Mix of “Hands Swollen With Grace”, or their tragedy, for example when Hauschka sets to music “A Quietly Gathering Tragedy” from his own perspective. Elegi’s version of “All The Love I Had Was Not Enough” is gonna send the shivers down your back, “Very Early One Morning On Old Road” keeps the tension high, too.
Although “The End Of Trying” is unique in its originality, the different adaptions just as well manage to find a suitable harmony between neo-classic and classical electronica. Particular but very intriguing.

01. Machinefabriek. One Day Without Harming You 02. Peter Broderick. This Failing Sea 03. Jasper Leyland. Hands Swollen With Grace 04. Hauschka. A Quietly Gathering Tragedy 05. Elegi. All The Love I Had Was Not Enough 06. Deaf Center. Very Early Morning On Old Road 07. Arve Henriksen. The End Of Trying Part 1 08. Greg Haines. The End Of Trying Part 2 09. Hannu. The End Of Trying Part 3 10. Tape. The End Of Trying Part 4 11. Swod. Een Langzaam Lekkende Wond 12. The Boats. The Night Keeps Coming In 13. Jacaszek. How Could You Let Me Go 14. Emanuele Errante. Second Hand Light 15. Loscil. Things We Lost Along The Way 16. Dakota Suite & Nick Hawley. Z-Cars