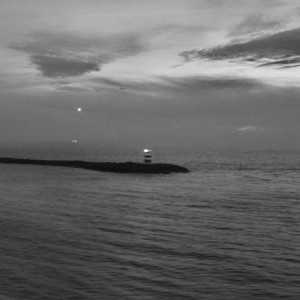 
The Sea Is Never Full

*** LP Includes A Free Download Voucher Of The CD Album

****** All orders include an instant download of the CD album

The origin of this collaboration began two months prior to the Fukushima disaster in Japan. Dakota Suite had been touring Japan with their friends from the Japanese band called ‘Vampillia’ and had been in several coastal locations in Wakayama as well as places near to Fukushima. The tsunami was very upsetting for Chris Hooson and David Buxton from Dakota Suite who then set about making music to reflect this overwhelming sadness and loss for Japan.

They approached Vampillia to work on these somber reflective songs for the sea. Vampillia is next alternative music from Osaka. Guitar, Noise guitar, Bass, Piano, Classical Strings, Velladon on Opera, Mongoloid on the dark metal vocals alongside twin drummers Talow the Tornado (NICE VIEW, TURTLE ISLAND) and Tatsuya Yoshida (RUINS).
From this lineup of 10 (sometimes more) comes experimental and beautiful dark music. Besides the new work with Dakota Suite, they have previously collaborated with acts such as µ-Ziq, Merzbow, Nadja and Lustmord. Their intense experimental style is the perfect fusion with the Dakota Suite aesthetic.

The songs came from a desire to reflect the phases of the disaster, the rising violent seas, the destructive power and loss preceding sorrow at the devastation which followed. Chris Hooson was haunted by images of floating pieces of wood which had once been someone’s ancient dwelling. The music Dakota Suite & Vampillia have recorded on The Sea is Never Full seeks to provide a mechanism to deal with this pain cathartically.

Various short pieces were passed between Dakota Suite and vampillia, who added strings and the distinctive throat singing of ‘mongoloid’ from vampillia. Japanese throat singing speaks to an ancient method, called rekukkara. It is tonal rather than melodic. As Hooson says „It seemed an appropriate way to convey the sadness we felt at the horror of Fukushima, which knows no words to express it accurately.“
After basic recording had been completed, David Buxton, in an act of pure genius, took apart every note of the music and created a two-part suite. It is hard to convey the seismic shift in this project after David presented this music in the form that it now stands. Hooson on his Dakota Suite band colleague Buxton “It has been the highlight of my recording career so far and David would not like the attention I give him, but I believe that this work in particular deserves to be heard as it is a work of beautiful and tragic choreography, it is a tribute to his mastery of music.”

This type of art cannot be written or envisaged, it can only be received and interpreted. Listening to this project continues to engender enormous sorrow in the listener, but the true beauty of such art is that it can take this sorrow as a cathartic force to help one manage these feelings. The Sea Is Never Full marks another momentous release for Karaoke Kalk. Together with Vampillia they have sculpted a truly epic record spanning musical styles from ambient and experimental to post-rock and neo-classical. Suffice to say, the result has nothing short if a breathtaking emotional impact.