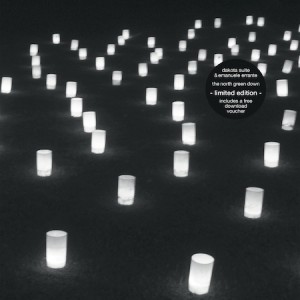 
The North Green Down

After collaborating on Dakota Suite’s remix project ‘The Night Just Keeps Coming In’, Chris Hooson of Dakota Suite asked Emanuele Errante to work with him on a project composed for the death of his sister-in-law called ‘The North Green Down’. Chris had composed a series of themes around the loss of his sister-in-law and in Emanuele found a partner to create the sounds which would evoke loss, the temporary nature of life and the stillness to get through. The powerful result ‘The North Green Down’ was originally released on Lidar in 2012 as a limited CD which is long since sold out. Now Karaoke Kalk makes this heartfelt and poignant album available again and for the first time ever on vinyl, including one additional previously unreleased track “Instincts Reduced To Silence”.

With 3 Dakota Suite albums on Karaoke Kalk – The End of Trying, The Hearts of Empty and There Is Calm To Be Done (together with Quentin Sirjacq) and one Emanuele Errante solo album – Time Elapsing Handheld – on the label, Kalk was the natural home for this double LP release. The two musicians distinct styles compliment and accentuate each other just perfectly. Chris Hooson bringing more classical arrangements of acoustic instruments and of course a strong jazz influence, while Errante lends delicate elements of ambient electronic processing into the mix. Their combined forces create a simply mesmerising sound. The Italian’s electronic contributions are perhaps most obvious on tracks such as ‘No Greater Pain’ which starts with and bases itself around a pulsating ambient drone. Elsewhere on the record the instrumentation drifts between divinely plucked classical guitar, lilting piano melodies and ecstatic string and cello parts, all of which weaves together to fabricate truly captivating and emotional soundscapes.
The album also features the marvellous cello of David Darling who featured extensively on Dakota Suites 2011 album on Karaoke Kalk, The Hearts of Empty. Here he again creates textures and waves of melancholy unlike anyone else. Hooson’s Dakota Suite bandmate David Buxton has also contributed recording and instrumentation. The expansive soundscapes that these four men have captured on this record is nothing short of spell-binding.

‘The North Green Down’ comprises almost 80 minutes of fragile pianos, guitars, cello & subtle electronic elements. It is cinematic, hypnotic and simply beautiful! Especially bearing in mind the emotional inspiration for the album, ‘The North Green Down’ is clearly the perfect musical expression of bereavement and a truly beautiful tribute to a wonderful soul. This delicate music is sure to appeal to fans of artists such as Ólafur Arnalds and Max Richter. It’s fair to say that the album is absolutely essential listening for any anybody with a love of of neo-classical, minimal and ambient music.

“In August 2009, Johanna and I took what we didn’t know then would be our last holiday with our sister-in-law, Hannah. We knew that Hannah had cancer and that it was most likely going to take her from us and that moment was something we could feel draw ever closer. We all went to a place loved by our family for many years, Southwold in Suffolk. It was clear that Hannah was in pain. We were walking back from the ocean, for Southwold lies on the sea, through a part of Southwold called ‘the north green’. I was overwhelmed by what I could feel being taken from us, every step we took represented a small death. I knew then that I would miss her. During that walk with Hannah through the north green I felt there the beginnings of the music you hear on this record as the main ‘north green down’ theme and knew I had to keep going with this tribute to her. I sent the basic piano and guitar pieces I had recorded at home to Emanuele. I had previously bought his records and felt in him a sympathetic soul who would feel the weight of this music and make it more fitting for the purpose I had in mind, namely a suite of hymnal pieces for Hannah.
Hannah was a beautiful, selfless and nurturing woman. This record is for her.” (Chris Hooson, September 2010)