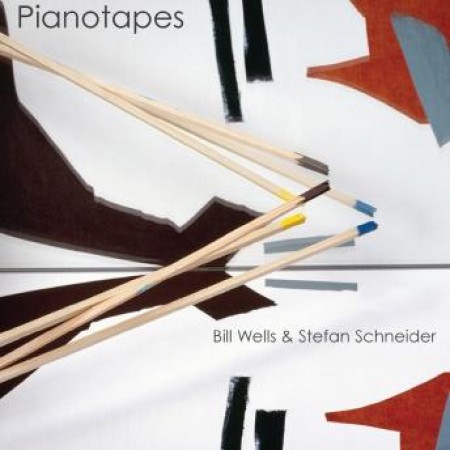 Actually what Bill Wells and Stefan Schneider are doing on their new album „Pianotapes“ is chamber music. Wells plays fragile scales on the Bechstein grand piano, while Schneider records them on two old reel-to-reel tape machines and plays the recordings back at altered speeds. This real-time recording process is reflected in Well’s piano playing, who replies with modulation and key changes, building the sounds and ideas into his improvisation, playing with them and developing them.

Bill Wells is the Nestor of the Glasgow indie scene. The bassist, guitarrist and pianist has worked with the likes of The Pastels and the BMX Bandits as well as recording an album with Isobel Campbell, formerly singer/cellist in Belle & Sebastian. Wells has allways been interested in areas of the avant-garde that flourish on the bordeline between electronica, folk, jazz and new music. His album „Osaka Bridge“ which he recorded with the Japanese amateur ensemble Maher Shalal Hash Baz is legendary. And with his own trio and octet he also creates a truly inspiring sound.

Recently he produced the album „ Pick Up Sticks“ in 2003 which was the first time he worked with Stefan Schneider zusammen. The man from Düsseldorf is part of the trio To Rococo Rot, has a solo project Mapstation, and works with Joachim Roedlius from Cluster. Schneider and Wells developed the idea for „Pianotapes“ together and presented it live for the first time at the piano festival „Approximation“ at Salon des Amateurs in Düsseldorf.

For the recordings the two musicians only rehearsed the technical set-up, everything else came about through improvisation. And the result is a rich tapestry of sound. Occasionally Schneider and Wells add synthesizer sounds into these counterplay of original and copy. The atmosphere has soemthing of a fairytale quality to it, but is never too eccentric. This is music that has been arranged with great clarity to make for something atmospheric and fascinatingly timeless. Chamber music for the closing phases of globalisation. With his cover design André Niebur, part of the artists collective hobbypopmuseum, has created the perfect visual counterpoint to the music on „Pianotapes“.